CE Safety » News » Sudden Cardiac Arrest: How YOU could save someone’s life with a defibrillator 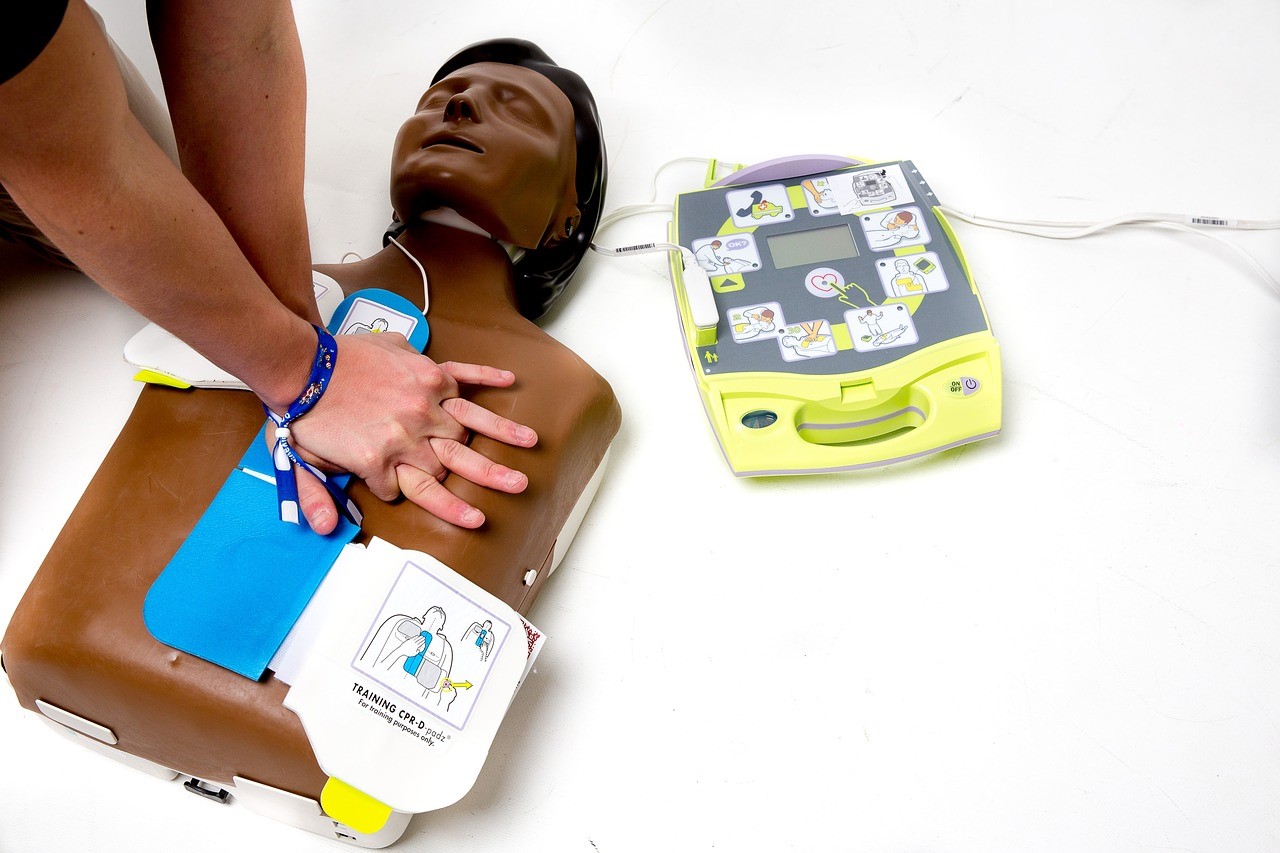 A defibrillator is a life-saving piece of technology that’s used to deliver an electric shock through the chest wall when someone goes into cardiac arrest.

Here at CE Safety, we want everyone to know where the nearest public access defibrillator is – and how you can use it alongside CPR to save a life. For that reason, we’ve been taking a look at how many defibrillators are available for the general public to access around the UK.

Spotting the signs of a cardiac arrest

Every year, 30,000 people suffer a cardiac arrest outside of hospital.

A cardiac arrest is caused by problems with the electrical signals in your heart. This stops the heart from doing its job of pumping blood around the body, eventually starving the brain of oxygen.

If a defibrillator is used to give a shock within the first minute of a cardiac arrest, there’s a 90% chance a person will survive. But for every minute that passes without a defibrillator, a person’s chance of survival goes down by 10% – so it’s essential to act quickly.

The signs of a cardiac arrest are easy to spot. A person will collapse suddenly. If shaking or shouting does not rouse them, and they have stopped breathing, or are breathing abnormally, they are in cardiac arrest.

The British Heart Foundation has outlined the four steps to take if you find someone who is having a cardiac arrest:

It might seem scary, but using a defibrillator is easy, as the device will instruct you in what to do. It will check the person’s heart rhythm and will tell you when to deliver a shock, and when to carry out CPR. The combination of CPR and defibrillation gives a person the highest chance of survival. 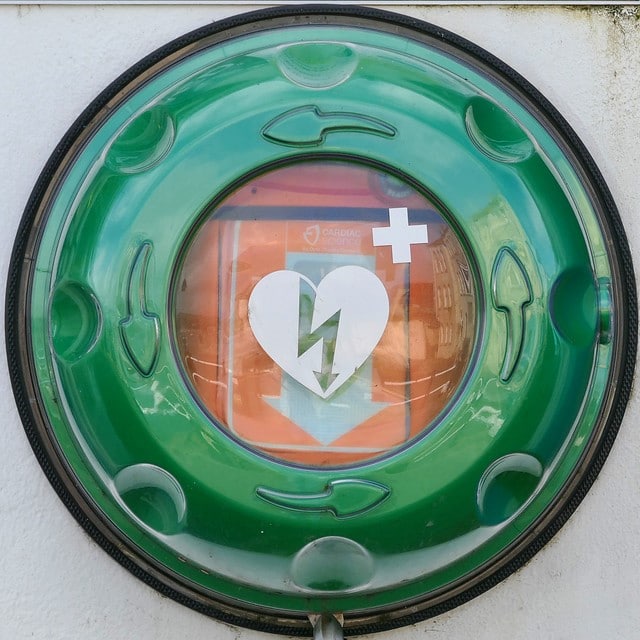 When you call 999, the call handler will tell you where your nearest defibrillator is, but if you can get to one even sooner, you could buy the vital seconds you need to help save a person’s life.

We have carried out research looking at data published by local ambulance services, as well as Freedom of Information requests, to find out where you can find public access defibrillators, or PADS, around the UK – and there are thousands! 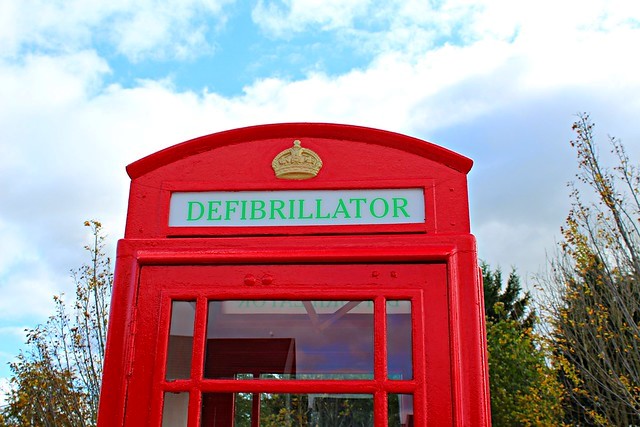 PADS can be found in public places from railway stations to sports centres, coffee shops to supermarkets and airports to community centres. These defibrillators can be accessed 24 hours a day, seven days a week by anyone – and there may be many more than you realise!

In fact, wherever you are in the UK, the chances are there’s a defibrillator somewhere nearby. London has the highest number of defibrillators – the total of 5,304. However, looking at the number of PADs per capita, London is not on the first place.

In Wales, Cardiff has 412 defibrillators peppered around the city, and Swansea and Newport have 348 and 166 respectively.

If you live in Northern Ireland, Belfast has 274 locations with defibrillators in schools, shopping centres and cafes, and Edinburgh has a reassuring 164 – so if you need to access one quickly, there’s likely to be one close to you.

However, the number of defibrillators does vary greatly from city to city. Our research found a huge disparity across Yorkshire. York has 12 available; Leeds has more with 47.

Birmingham is the second largest city in the UK, but only has 24 public access defibrillators: all the more reason to know where they are located, so that you can get to them in time. Other cities across the Midlands have a lot more PADS, though: Wolverhampton has 112, and Leicester has 68.

One of the areas in the UK that’s not very well served for public access defibrillators is the North East of England. Two of its biggest cities, Newcastle and Sunderland, only have a combined total of 33 defibrillators that can be used by the public around the clock.

Manchester also has surprisingly few PADS compared to its population size. With a population of well over half a million people, there are only 67 publicly accessible defibrillators.

But don’t be alarmed. Even if a city doesn’t have a lot of PADS, it doesn’t mean that you won’t be able to access one if you need it. There are thousands of other defibrillators across the whole of the NHS, including in ambulances and response cars, and other emergency services such as police cars and fire engines also hold them in their vehicles.

In 2017, an initiative by London Ambulance Service and the Metropolitan police saw defibrillators added to over 700 police response vehicles. The capital’s transport network is also well-stocked: defibrillators are available across 215 stations on the whole of the Transport for London network. 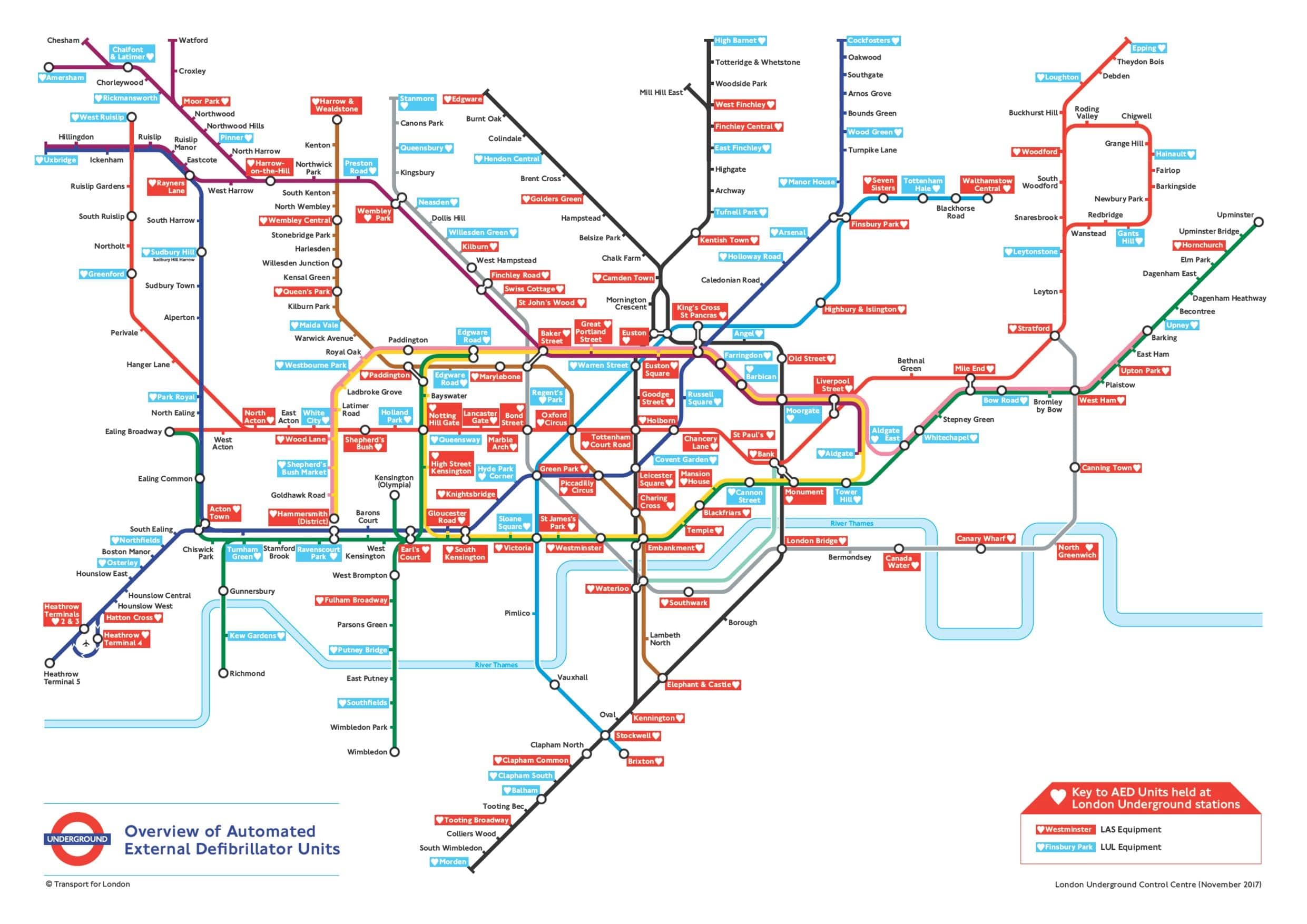 Of course, there are many other defibrillator locations that may not be classed as being ‘public access’ because they may be kept in a locked staff area, for example, or a building may have restricted opening hours. But simply knowing that somewhere has a defibrillator, even if you have to ask for it, can help you to gain those precious seconds in an emergency.

Find out more about our AED training course.