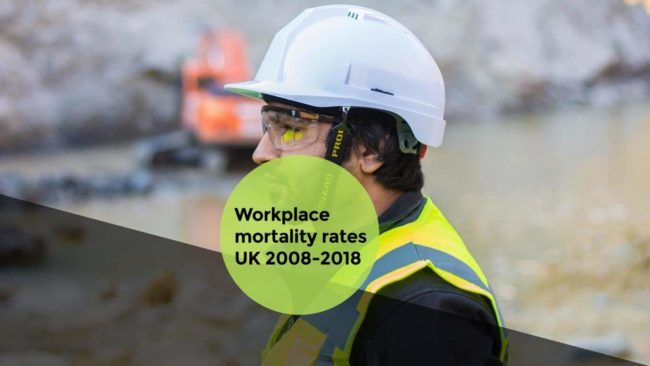 Workplace Health and Safety Training is more important than ever with workplace deaths continuing to occur with very little decline.

Because of this, we at CE Safety have analysed workplace death data between 2008-2018 to discover which industry is the deadliest industry to work in and why this is still occurring.

When carving out a career, mortality rates aren’t usually the first thing that springs to mind before deciding whether to enter a specific industry – but there are a number of extremely hazardous sectors where employees unknowingly put themselves at risk every day.

Hundreds of people are rushed into hospital every year with fatal injuries, many resulting in sudden death from accidents happening whilst at work.

We’ve conducted a deep dive into Health and Safety Executive (HSE) workplace death data from the past 10 years (2008-2018) to find out why workplace deaths are still commonplace. Our report identifies the high-risk and deadliest industries, where in the country the most workplace deaths occur and what employees in these sectors can do to help them stay safe.

According to our analysis, 1526 have died at work and annual figures remain fairly consistent each year, despite the Health and Safety at Work Act been introduced in 1974 and many training courses on offer.

Which are the deadliest industries?

When breaking the data down by industry, construction is revealed as the deadliest industry, with 451 people dying in the last 10 years. That’s an average of 45 people every year, higher than any other industry. Builders, roofers, and scaffolders all sit within this category – those that often work at height.

Out of the 1526 people killed at work every year, 329 of those occur within the services which include police, fire fighters, and armed forces. Following that, 300 people die within agriculture too. Working with cattle and agricultural machinery can also be extremely dangerous. Our results show that 36 deaths were the result of being struck, trampled on or coming into contact with cattle, whilst 31 deaths were causes by freak accidents when operating machinery.

The report looks at specific times of the year when workplace deaths spike and find that if there’s a specific day when most deaths have happened. 373 people have died on a Tuesday in the UK and 84 workplace deaths occurred on the 8th of the month. Making Tuesday 8th the most deadly date of all.  Whereas 327 people died on a Friday and 80 on the 13th.

When examining the dates with the highest mortality rates, the deadliest year over the last 10 years was 2011, in which 174 workplace deaths were recorded.

The year with the lowest workplace death count was

But with proper health and safety legislation still in place, why are people still dying at work?

What is the biggest cause of workplace deaths?

When looking at the biggest causes of workplace deaths, being hit by heavy objects such as concrete blocks, cars and forklift trucks are most common, followed by contact with deadly objects including chainsaws. However, falling from height is a common cause of death within construction but other industries as well killing 130 people in total.

When analysing the data, it became apparent that out of 1526 individual death reports, 440 were struck by an object 130 of these occurred as a result of falling from a great height, equalling 19.95% of all deaths.

Some of the deaths included in this report are freak accidents, such as deaths caused by being struck by, trampled on or hit by cattle, which has led to 36 deaths overall.

What is the average age of workplace deaths?

When analysing the data, we found that the average age of all workplace deaths, across all locations and industries over the last 10 years, is 48 years old.

We decided to break this down further to find out the average age of workplace deaths within in each industry.

Where do most deaths happen?

When examining the locations with highest workplace death rates, The highlands came out on top, with Cornwall, Sheffield and Birmingham following and appearing in the top five.

(of which, 21 were within the Agriculture industry)

(of which, 14 were within the Agriculture industry)

(of which, 17 were within the Agriculture industry)

(of which, 19 were within the Agriculture industry)

(of which, 8 were within the Waste industry)

(of which, 12 were within the Agriculture industry)

(of which, 10 were within the Construction industry)

(of which, 8 were within the Construction industry)

(of which, 9 were within the Service industry)

(of which, 8 were within the Construction industry)

When grouping these together, it seems the UK’s most dangerous jobs are in Scotland featuring in the top 3.

What are the average salaries of the deadliest industries?

When looking into salaries, these jobs pay just above the UK national average – according to a recent report in The Guardian, average national salaries were at £28,677 in 2018. These sectors included in the report should be paying their employees a form of compensation due to the hazardous nature of the jobs – but most sectors don’t, as it’s currently not been enforced.

Service industries comprise of some of the most high-risk day to day working activities and yet this sector pays the least. Construction is the most dangerous industry and pays the most on average.

What is hazard pay, and when are you eligible for it?

Hazard pay is an extra form of financial compensation given to employees for performing duties that are considered dangerous. Surprisingly, there is no law in place for hazard pay and it’s currently given at employers’ discretion – with many companies opting not to pay it.

There is no legal definition of a hazardous condition, but some examples include:

How to stay safe in high-risk industries

Employers are ultimately responsible for the safety of their employees, but there are also a number of things employees can do to keep themselves safe:

What are the business benefits to health and safety?